skip to main | skip to sidebar

Putting Mothers Everywhere Out of Business…

I think each time I make this apple dumpling recipe; I cause a rift in someone’s family. Of course, I can’t take all the credit—I got the recipe from Pioneer Woman. EVERYONE asks me for the recipe, and everyone whose mother has an apple dumpling recipe admits (rather shamefully) that they like this recipe better! Plus, it’s really easy, and it has a super secret ingredient. Well, not all that secret, I guess, since you’ll get to see what it is in the recipe below. It’s more of a surprise.

When I make these, I don’t even have time to get out the camera to take a picture! So, I borrowed one from PW. I hope she doesn't mind. :) 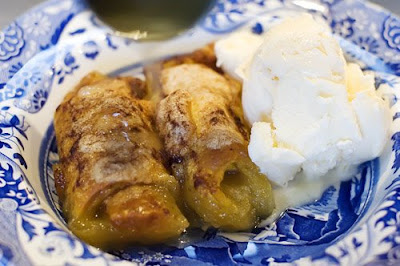 2. Peel and core apples, cut each apple into 8 wedges.

3. Open the packages of crescent roll dough, and separate into triangles.

4. Wrap one wedge of apple in each triangle of dough, and line them up in the baking dish.

5. Melt the two sticks of butter in a small saucepan. When the butter is all the way melted, add the sugar and just barely stir it. Pour the butter and sugar mixture over the dumplings in the pan.

6. Pour the can of Mountain Dew around the edges of the pan.

7. Sprinkle with cinnamon to your taste. I used quite a bit!

9. Serve dumplings with some of the sauce from the pan and a scoop of vanilla ice cream.

Yes, the secret to this recipe is Mountain Dew. It sounds strange, I know. People that hate Mountain Dew can’t taste it in this recipe, so don’t let that stop you from trying it. The one exception to this is my husband (and Mountain Dew hater), who after seeing me add it to the pan, tries the apple dumplings and says they’re “just ok.” He claims—no, insists—that he likes the other recipe I made better. Which other recipe? Oh…it’s the same one; he just didn’t see me add the Mountain Dew last time. He swears it’s a different recipe, but unless I was cooking in my sleep at some point, this is the only kind of apple dumpling I’ve ever made. And they’re really, really delicious.

By the way, I don’t think I’ve made one Pioneer Woman recipe yet that I haven’t liked. So, if you go check it out, you’ll find some good stuff. These sandwiches are to die for! The cheesy scrambled eggs were a big hit with my husband and my mother-in-law. The cookies with Reese’s Cups were a big hit at my Uppercase Living party. The next thing I’m going to make are the jalapeno thingies, only I’m going to do them on the grill like Jason and Annemarie! By the way, never make these--you'll get hooked on them. They're like crack...

On a totally different subject, I am loving our new grill! It came to us because of the lovely refund we received from the Indiana Department of Revenue, and it’s been used every day since Tracy put it together. Tonight, though, it got a break, since we went out for a quick dinner before our small group. We went to the new Mexican restaurant in Northwood (between Penn Station and the post office); I think it's called Casa Grande. It was dee-lish! We'll definitely be going back there soon.

Happy Easter! This is for the one person that reads my blog...right Amy?

Here is a picture of an Easter card I made. Actually, I made a few of them and gave them out to people when they came to our house or we went to their house yesterday and today. I just love the little bunnies! It's a little hard to see in the picture, but the tails are fluffy. :) 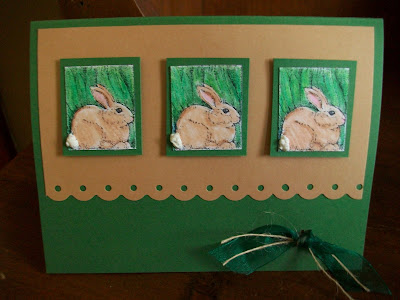 Yesterday, Tracy and I had a really great dinner at my parents' house. My mom fixed salmon with roasted potatoes and asparagus. It was nice to see everyone...my sister was in town, too! Here's a picture of the dessert, which was called "Raspberry Charlotte." Everything was fantastic! 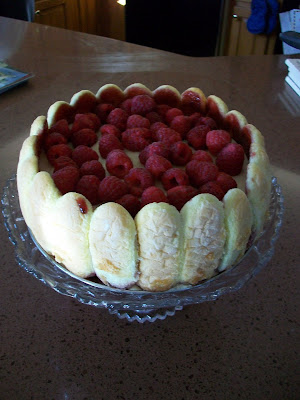 Today, Tracy and I were planning on relaxing at home for the day after church. Instead, we got invited to spend the afternoon with a couple from church at her house for the family Easter dinner. It was a nice surprise, and we had tons of fun! 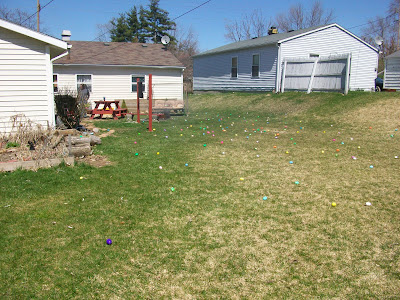 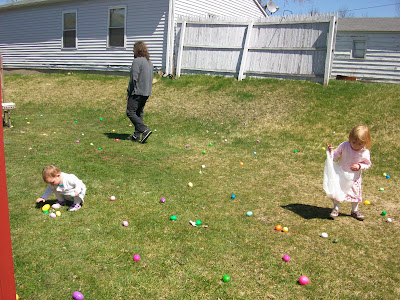 There was lots of yummy food, and then we had an Easter egg hunt. Everyone there, no matter how old, got involved in the hunt! What was so special about it? Well, we had the standard candy-filled plastic eggs, but the fun part was the Mexican Easter eggs. I had never heard of this before, but it's a Mexican tradition. You blow the insides out of an egg and then fill it with confetti. It's good luck to find one and break it over someone's head. So...we were running all over the place looking for the "special" eggs and then attacking each other! 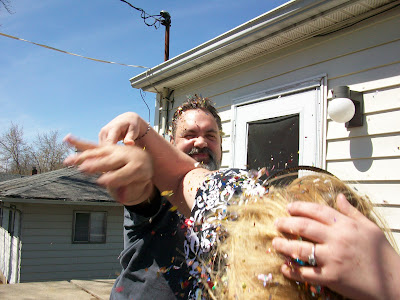 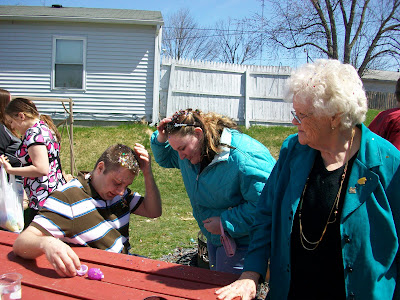 Needless to say, we were all covered in sparkly confetti by the end of the hunt. It was everywhere--in our hair, inside our clothes, the yard, and the house! We had so much fun, and the best part of it all is that we made some new friends!

I'm going to try really hard to keep my blog more up to date. Really! I've just been so busy lately that it's been hard to find time to sit down at the computer and post new entries. So that's all for now...more is coming soon.
Posted by Charlotte at 8:34 PM 6 comments 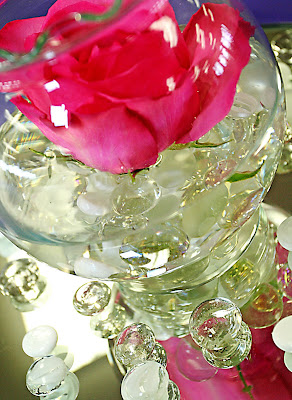 Posted by Charlotte at 8:20 PM 7 comments 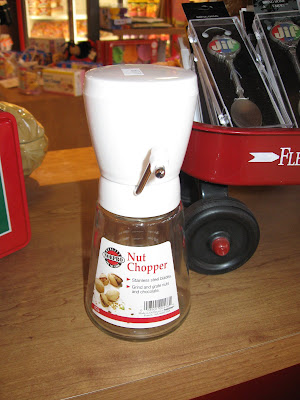 I'm sure you've seen magazine articles or emails that tell you how to use ordinary household items for something entirely different. This video takes that concept to a whole new level...

Garlic bread anyone?
Posted by Charlotte at 7:00 AM 1 comments 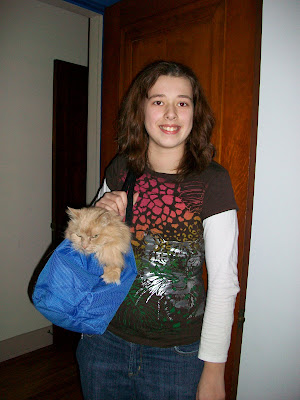 Posted by Charlotte at 9:12 PM 1 comments 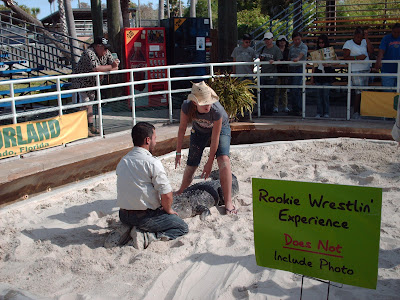 In a previous post, I mentioned Uppercase Living and how much I liked it. Well, now I'm going to be selling it! I finally got my starter kit, so I'm getting ready. I need to order a few things for my display, and then I'll have an open house. I'm so excited!

In case you haven't heard of Uppercase Living, they make decorative lettering and embellishments that you can use to decorate your home. The expressions can be used on any type of flat surface: walls, glass, metal, wood, etc. Expressions come in all different colors and sizes. They can be removed, and they don't damage painted surfaces.

Stay tuned for more pictures and ideas. If you want to place an order or have an open house (you'll get free stuff!) leave me a comment or send me an email.
Posted by Charlotte at 9:15 PM 2 comments

Ok, maybe not so random. I owe a few Random Thursday pictures, so here's a recap from newest to oldest. I'm apologizing in advance for my horrible photography skills.

Yikes, what did I just do? 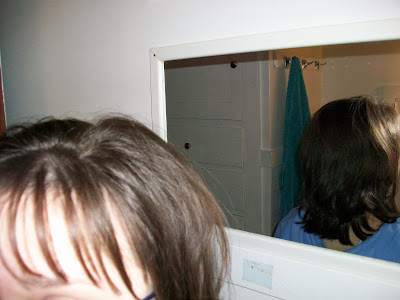 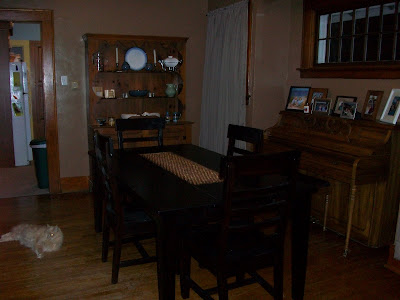 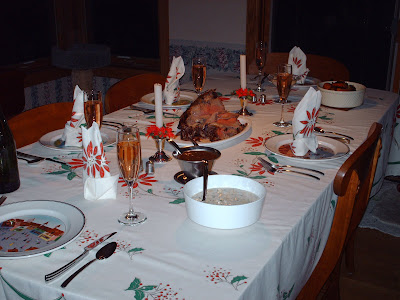 Posted by Charlotte at 9:09 PM 1 comments

It will be here sooner than you think...

Christmas will be here in less than a week!
Are you ready???
I finished my shopping last night, and everything I have so far is wrapped. We're still waiting on some packages to come in the mail, so hopefully they'll be here soon.

Soon I will post some pictures of gifts and cards that I made, but not just yet. I don't want to spoil the surprise for the lucky recipients that read my blog...

What are your plans for Christmas this year? Christmas Eve, we'll be heading out to my parents' house for dinner. Christmas Day we're having my family over. I'm really looking forward to it.
Posted by Charlotte at 8:00 AM 8 comments